FOOD IS THE MOTHER OF PEACE

Momofuku Ando invented ‘Chicken Ramen’, the world’s first instant noodles, in 1958 and with that one act revolutionised the way the world eats. Ever since the end of World War II, which left much of the world reeling under food shortages, Mr. Ando had wanted to create a product that could be eaten anywhere, anytime. His achievement, through months of hard work and experimentation, led to the creation of instant noodles, and brought about a revolution in culinary culture and tastes around the world.

In 1971, Mr. Ando developed ‘Cup Noodles’, the world’s first cup-type noodle product. This sparked an interest in instant noodles worldwide. The little seed sown by Momofuku Ando has now grown into a huge industry that supplies over 100 billion servings annually to consumers throughout the world.

Momofuku Ando was born on March 5, 1910 and graduated from Ritsumeikan University with a degree in Economics. He later received an honorary doctorate from the university.

Even as he ran Nissin Food Products, Momofuku Ando also served in public posts such as that of the President of the Japan Convenience Foods Industry Association and Chairman of World Instant Noodles Association (WINA).

Time Magazine recently featured Momofuku Ando in its ‘60 years of Asian heroes’. Momofuku Ando passed away on January 5, 2007, at the age of 96. His funeral on February 27, was held in a space-themed setting that evoked the mysteries of the cosmos, in honour of his passion for space that culminated in the development of Space Ram, the first noodles to be consumed in space.

In an article published on January 9, 2007, the New York Times called Momofuku Ando “Mr. Noodle”, adding that he had earned an eternal place in the pantheon of human progress. We salute the great personality and commit to follow his words:

“Be detail-oriented, yet bold. Be very detail-oriented in looking carefully at a situation and investigating it thoroughly, but if action is indicated, be bold and act fast.”

The entire Nissin Foods Organization is united in its determination to follow the wishes of our late founder by continuing to develop innovative food products.

IN HIS OWN WORDS.

Excerpts from the autobiography of Momofuku Ando – the inventor of instant noodles.

“One evening in winter, I happened to see a line 20-30 metres long, in front of a dimly lit stall from which clouds of steam were steadily rising. People shivered in the cold while waiting for their turn. They were lined up for a bowl of ramen (noodles).

That is how I first developed an interest in ramen. I realised that people were willing to wait patiently just for a single bowl of ramen.

It was not until 10 years later that I finally succeeded in developing instant noodles. I will never forget the day. It was August 25, 1958. I named the product ‘CHICKEN RAMEN.’

“It is said that clothing, food and shelter are basic human necessities. To that I would add this observation: Without food, there would be no clothing and shelter or, for that matter, art and culture.

I realised the importance of food in times of deprivation during and immediately after the war. I coined the phrase ‘Peace follows from a full stomach’ to express my sentiments.”

In 1958, Momofuku Ando, the founder of Nissin Foods, invented instant noodles as a quality, convenient food product that is ready to eat just by adding some hot water. It was an invention motivated by his intense desire to help feed the masses suffering from the food shortages in the period after World War II.

Fifty years on, our instant noodles have become part of people’s daily lives throughout the world. And the industry we pioneered, instant noodles, is foraying into newer markets with resounding success.

But Nissin Foods was not content to rest on its laurels. In 1971 we came up with another revolutionary product: cup-type noodles. This is a concoction of soup, toppings and noodles, all contained in a single container that can be used for storage, preparation, and servings.

And as the world progressed technologically, developing new needs and tastes in the process, Nissin has kept pace. On March 11, 2008, when NASA’s Endeavour took off, along with its usual payload of scientific instruments, the space shuttle also carried our newly developed udon, soba, yakitori, inari-zushi, shouga-inari-zushi, and okonomiyaki space rations. These space foods were jointly developed by Nissin Foods and the Japan Aerospace Exploration Agency (JAXA). Nissin developed these noodle side dishes to support the scientific activities of Japan’s Kibo Laboratory and the astronauts.

Indo Nissin Foods Limited, a subsidiary of Nissin Foods Holdings Co., Ltd., Japan, was incorporated in 1988 and is committed to developing brands that communicate the wholesome taste, satisfaction, and fun of instant noodles along with food safety and customer enjoyment. Although it has been a long time since we pioneered instant noodles, our eyes are still set on the future, wondering what will be the next new product, and the next, and the one after that… 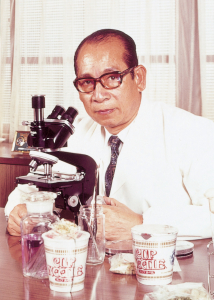